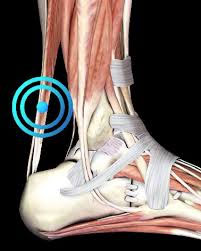 A tendon is a tough fiber that connects muscle to bone.  A tendinopathy is a term used to describe pathology in a tendon.  In the past these may have been known as tendonitis, which suggested that inflammation was occurring, but this was later disputed so the term tendonosis or tendinopathy was used.

Examples of Tendinopathy include:

It is clear that not all tendon pains are the same, for example a young athlete with an acutely painful tendon is different to a 50 year old with pain going on for over 6 months.  To reflect the differences in these patients and to understand them better a Continuum Model was proposed by Cooke and Purdam in 2008.

Our Doctors in Limerick are experts in treating Tendonitis. Call us today on (061) 312291 if you need help.

They proposed 3 stages of Tendinopathy / Tendonitis.

The first being Reactive Tendinopathy/Tendonitis where there is acute pain and thickening of the tendon, usually due to an increase in the work or training load.  If the overload is sufficiently reduced or there is sufficient time between loading sessions it tends to settle.

The second stage, Tendon Disrepair, is where the tendon attempts to heal but hasn’t managed it.  This stage may be difficult to distinguish clinically.  These tendons are thickened with more localized changes in one area of the tendon and symptoms may be present for longer.  Some reversibility is possible in this stage if load is managed and appropriate exercise performed.

The third stage is Degenerative Tendinopathy / Tendonitis.  This stage occurs when symptoms have been present for a prolonged period of time.  It is more common in older athletes.  Permanent degenerative changes in the tendons structure are present at this stage along with new blood vessels and nerve supply.  These changes are permanent and cannot be reversed.

Even though a tendon may be degenerative there is still a proportion of tendon that is good and studies have shown that a patient’s pain and function can be improved at this later stage with appropriate management and focusing on treating the good portion of the tendon that exists.

So how do we treat Tendinopathy / Tendonitis?

Tendinopathies/Tendonitis can be challenging to treat and can take time to settle.  As per the continuum model  we understand that any degenerative changes in the tendon are permanent so any intervention will not address this.  But we can target the pain and treat any dysfunction by focusing our treatment on strengthening the good portion of the tendon.

It is known that pain causes dysfunction and studies have shown that pain can inhibit muscles so in order to treat the dysfunction we need to address pain.  Extracorporeal shockwave therapy (ESWT ) has been shown to help reduce pain in Tendinopathy/Tendonitis.  This, in conjunction with an appropriate rehabilitative program that addresses the deficiencies in function of the tendon, leads to the best outcomes.

The function needs to allow the tendon to have the ability for energy storage loads and sometimes deal with compressive loads and friction loads.  A poor functioning tendon will in most cases continue to have pain.

Any tendon can develop a tendinopathy / tendonitis but common ones include Achilles, Patellar, Gluteal, Hamstring and the common extensor/flexor tendons of the forearm. 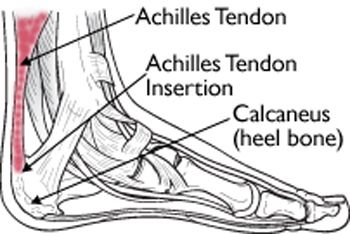 Patients usually present with slow onset pain, which is well localized usually above the heel bone or the back of the leg.  It is usually worse in the mornings but can ease with mild activity or after warming up.  It can be ok during activity and be sore again following it.  It can be aggravated by strenuous activity like sprinting and by ascending and descending stairs.  Sudden onset severe popping/snapping with pain and associated with bruising might suggest an Achilles rupture which would need immediate treatment via immobilization or surgery.

Your doctor usually makes the diagnosis of Achilles tendinopathy after a full history and examination.  Imaging can be helpful to confirm the diagnosis and exclude other possible causes but is not usually necessary.

Once a diagnosis is confirmed treatment options can be discussed including treatments such as ESWT, heel lifts or night splints and an appropriate strengthening or physiotherapy program. 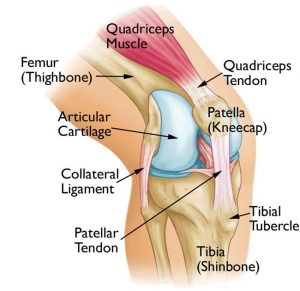 Patellar tendinopathy / tendonitis is a pathology that is known to begin in adolescence.(Gisselen et al)  So if a patients presents in their mid to late 20’s the pathology may have been present for many years before the patient first presents with this pain.  The patient usually complains of well localized pain in the front of the knee which can be aggravated by ascending stairs, jumping, squatting, prolonged sitting and sit to stand.  Like some other tendinopathies it can ease with warming up but an increase in pain on resting/stopping is noted and can be worse the next morning.

The diagnosis of Patellar tendinopathy / tendonitis is usually a clinical diagnosis.  Treatments including shockwave therapy ESWT and rehabilitation aim to help with pain and function. 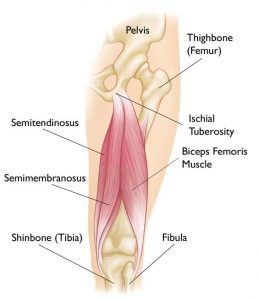 Proximal Hamstring tendinopathy / tendonitis is a condition at the common insertion of the hamstring muscle into the ischial tuberosity of the pelvic bone.  It presents with pain deep in the buttock and posterior thigh.  It can ease with warming up and later become painful.  Pain is usually worse with running, squatting, lunging and sitting.  It is rarely painful with walking, standing or lying as these activities don’t load or compress the tendon.

Other causes of buttock pain include referred pain from the back, sacroiliac joint related pain, Deep Gluteal syndrome and ischiofemoral impingement.

It tends to affect sports people involved in repetitive kicking, jumping or running sports.  It can also affect middle aged female runners and over 50 non athletic women and race walkers.

A thorough history and examination sometimes aided with imaging such as MRI can diagnose this condition.

Gluteal Tendinopathy / Tendonitis is considered the primary cause of lateral (outside) hip pain. It can affect inactive people and runners and is thought to affect 1 in 4 women over 50.

It was previously known as Trochanteric Bursitis but now is often referred to as greater trochanteric pain syndrome.

It is believed to be an insertional (where it attaches to the bone) tendinopathy / tendonitis of the gluteus medius and or minimus muscles.  It typical presents with pain at the outside of the hip over the bony prominence known as the greater trochanter.  It can cause pain down the outside of the thigh.  People can complain of pain with walking running and climbing stairs.  Side lying can be painful and pain at night is not uncommon.  Prolonged sitting, especially if sitting with legs crossed can aggravate the pain.

Treatment involves avoiding aggravating movements and positions, pain reduction techniques such as isometric exercises and shockwave therapy ESWT along with a strengthening program. 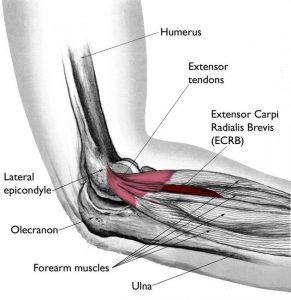 Source: Reproduced and modified from The Body Almanac. © American Academy of Orthopaedic Surgeons, 2003.

Tennis elbow is a tendinopathy / tendonitis of the tendons of the forearm that attach to the outside part of your elbow called your lateral epicondyle.  It was called tennis elbow originally because it was common in tennis players following overuse and in some cases due to poor backhand technique.

It is an overuse injury of the muscles of the forearm that extend the hand at the wrist.  The most common muscle involved is called the extensor carpi radialis brevis (ECRB).

Although called tennis elbow it can occur in work or recreational activity, especially activities that involve the vigorous use of the muscles of the forearms such as painters, plasterers, and carpenters for example.  It is more common to get it in the dominant arm.  It usually occurs in adults between the ages of 30 and 50.

It can present slowly causing pain and burning over the outside of the elbow with a weakened grip strength.  Symptoms often worsen with forearm activity.  The symptoms of tennis elbow can last up to 2 years if left untreated.

A thorough assessment and examination is needed to confirm the diagnosis and out rule other possible causes of lateral elbow pain such as Radial tunnel syndrome, referred pain from the neck, shoulder injuries and arthritis of the elbow.

It is caused by compression of the deep radial nerve (posterior interosseous nerve which supplies the extensor and supinator muscles of the forearm) most often after it passes through the supinator muscle.

Pain can be exacerbated by elbow extension, wrist flexion and ulnar deviation.  The pain typically is further away from the lateral epicondyle than with tennis elbow, typically between 3-5cms.  It can occur in conjunction with tennis elbow and is generally treated conservatively with stretching and nerve flossing techniques.

Golfer’s elbow is much less common than tennis elbow.  It is similar to tennis elbow in that it too is a tendinopathy / tendonitis of the elbow, but unlike tennis elbow the pain is located on the medial (inner) aspect of the elbow and involves the muscles that flex the hand at the wrist and not the extensors.

It is not limited to golfers and anyone that overuses the muscles that flex the wrist and pronate the forearm can get it.

The most common muscles involved in golfers elbow are the flexor carpi radialis and pronator teres.

History and examination is usually enough to diagnose this condition.

Treatment involves pain relief, stretching and strengthening. Shockwave therapy ESWT and bracing have been shown to be helpful.  Rarely is surgery required. 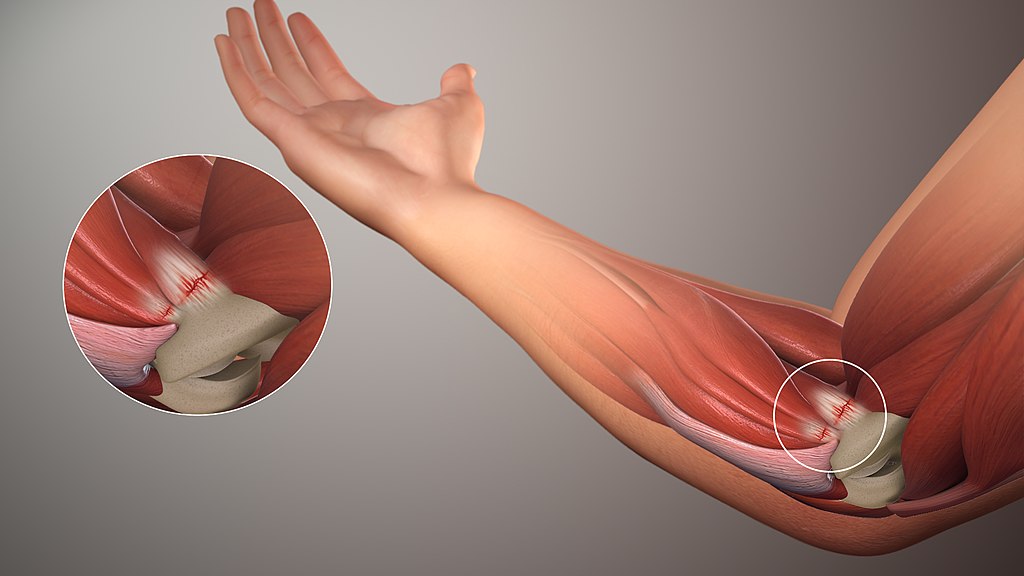